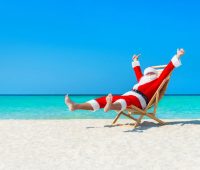 Feeling a little jaded about Christmas?

Spice up the festivities and head for the Caribbean for some pleasurable surprises and something a little different. A steel band playing Jingle Bells while you enjoy a rum punch or Santa Claus arriving by speedboat!! If this is still not quite enough then read on, for things could get interesting. Christmas: Caribbean Style is a mix of familiar Yuletide traditions with a local island twist.

A ‘spring clean’ of the house, a lick of fresh paint and it’s time for friends and family to gather for an open-door Barbadian Christmas dinner.  Meats make up the main event with honey glazed baked ham served with golden applesauce. There’s also a mix of succulent pork, turkey and chicken accompanied by Bajan stuffing and sweet potato pie. Ever heard of Jug Jug? Dating back to the 17th Century when Scottish exiles attempted to make a version of haggis from local ingredients, it provides a rich, flavoursome accompaniment to the turkey.

Then a grand selection of desserts, from Sweet bread and pudding to scrumptious cakes, is presented after dinner.  A traditional favourite is moist black Christmas cake, inspired by British Plum Pudding, the secret to its richness is soaking the fruit for a long time in rum. Caramelised sugar gives this unique cake its deep colour with of course more rum, essential on the Christmas: Caribbean Style menu! 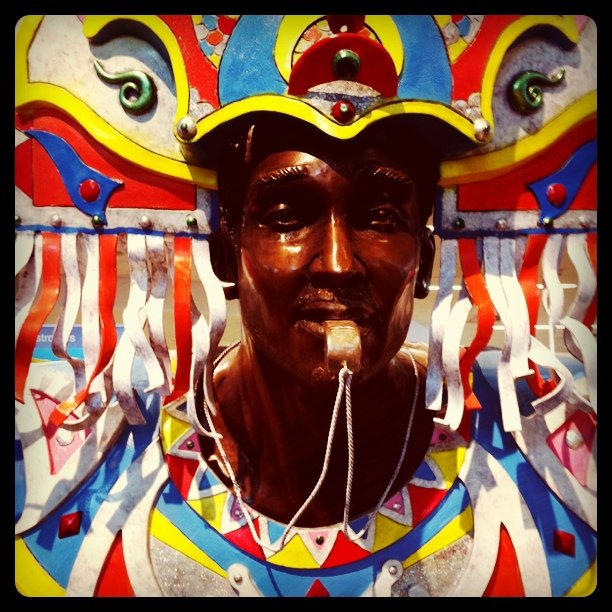 Festivities and celebrations are the way it’s done in Jamaica. The traditional  ‘Jonkanoo’ (John Canoe) ‘warming us up for Christmas’ parade sees party-goers proceed through the streets dressed in vibrant costumes.  Look out for the comical masquerade masks such as horse heads, policemen or wild Indians. Check out the Stilt men, Moko Jumbies and Clowns and even Boom Boom Sally or Mother Sally, as they entertain the crowds.

Food is never far away and women tend to take charge, preparing a delicious traditional dinner for friends and family.  A magnificent feast of chicken, curry goat, roast ham and oxtail is laid out with accompaniments such as Gungo peas cooked with delicious rice and peas and a distinctive tasting Jamaican-style Christmas fruit cake, soaked in rum and served for dessert.

Forget the Prosecco! Jamaicans tend to favour the popular ‘Sorrel’, the undisputed drink of Christmas made from the fleshy petals of the Roselle plant (hibiscus sabdariffa). A unique blend of dried sorrel, ginger, cinnamon, cloves, sugar and orange peel is served over ice. Give it a go with or without rum.

Puerto Ricans see Christmas as a time to rejoice.

If you’re looking for a double dose of Christmas music and food, rejoice in Puerto Rico where the holiday season begins with a grand music festival (Parrandes).  Here, dancers and musicians travel from house to house singing songs (Aguilnaldos), known as ‘gifts’  over a period of six weeks making it an enduring time for all.

And then there’s the food. Tradition would not be the same without ‘Lechon Asao’, an old custom in Puerto Rico where the cooking of the pig on a spit is completed, served with rice and beans.

Both in Trinidad, and Puerto 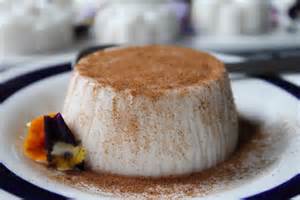 Rico ‘Pasteles’ (or meat pastries) are prepared with juicy spiced beef or pork and stuffed with capers or olives and raisins. In Trinidad, the idea is to wrap the pasteles in banana leaf whereas in Puerto Rico, they are wrapped in plantain leaves, steamed, and then given as a treat or gift. Other islands make a sweet, non-filled version with grated coconut, pumpkin or sweet potato, sugar and spices such as nutmeg, cinnamon and allspice. ‘Tembleque’ (a smooth coconut based pudding) qualifies as the perfect dessert after a lavish meal, consisting of coconut, custard, cornstarch, vanilla and cinnamon. 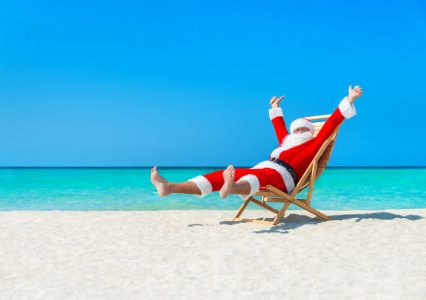 Or Santa Claus, Papa Noel or St Nicholas, depending on whether you are on an English, French, Dutch or Spanish speaking island. Church is also an important part of celebrating Christmas with many services offering candlelit carol concerts, midnight mass and early morning Christmas services. The congregation sports their very best outfits, often newly purchased for the occasion.
Folk music and carnival-like festivals are aplenty at this time of year

Christmas is not complete without carol singing and familiar carols can be heard all over the Caribbean. Many of them with a ‘Caribbean’ remix complemented by folk music which varies from island to island.  A huge variety of instruments from drum (bass, kettle, gumbay) and a flute/fife, a triangle, tambourine, shak-shak and possibly a banjo, ukulele or quarto are used. In some cases, anything that will make a noise – afro-pick combs, cheese graters, old car tyre rims with an iron rod, a bottle with nails or a spoon, even pots and pans! The latter is more typical of parang groups in Trinidad (who sing in Spanish).

So, if you fancy something a little different this year, you could opt for a beach barbecue or picnic, and plenty more besides. Fancy a game of beach cricket instead of building a snowman…?